Santa Ana Winds, Why So Dangerous in Riverside? 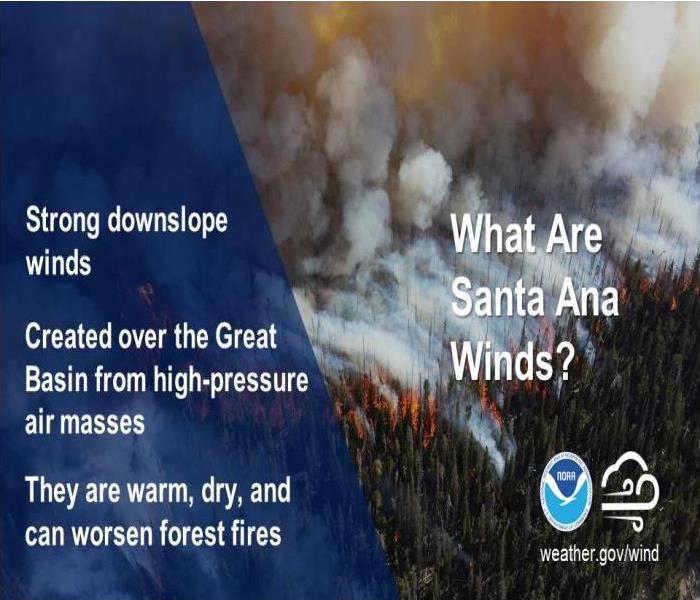 Call SERVPRO of West Riverside if you experience disasters from high winds due the Santa Ana's.

What are Santa Ana Winds?  Why do the strong gusts of wind feel warm, and why do they cause fires?

Santa Ana Winds are something unique to Southern California.  They can cause a great deal of damage. The fast, hot winds cause vegetation to dry out, increasing the danger of wildfire. Once the fires start, the winds fan the flames and hasten their spread. The winds create turbulence which exhibit substantial change in speed and/or direction with height.

Santa Ana Winds occur when air from a region of high pressure over the dry, desert region of the southwestern U.S. flows westward towards low pressure located off the California coast. This creates dry winds that flow east to west through the mountain passages in Southern California. These winds are most common during the cooler months of the year, occurring from September through May. Santa Ana winds typically feel warm (or even hot) because as the cool desert air moves down the side of the mountain, it is compressed, which causes the temperature of the air to rise. These strong winds can cause major property damage. They also increase wildfire risk because of the dryness of the winds and the speed at which they can spread a flame across the landscape.

Wildfires are a common hazard across California. When conditions are right, small fires can become raging firestorms in the blink of an eye. Being prepared can make all the difference to your safety.

California Fires are usually named by the dispatcher who takes the initial report and sometimes by the first responder at the scene, The Los Angeles Times reported. Dispatchers will name fires by finding a nearby landmark or feature, like a canyon, river or valley.

In Just recent weeks, we've experienced the Airport Fire which started near the Corona Municipal Airport.  It was reported Tuesday night, on Dec 1, behind the airport at Prado Basin.  It was less than 5 acres but red flag conditions, Santa Ana winds and low humidity kept it going.  On Wednesday it spread to 50 acres and by Thursday had grown to 500 acres with 0% containment.

Also burning Thursday December 3rd was the Bond Fire in Orange County.  This was initially started by a home fire that quickly turned into a wild fire due to the dry wind conditions.  By end of day Thursday it grew quickly to 7,200 acres!

Here is some information from Riverside Ready regarding terms we should all be familiar with.

SERVPRO of West Riverside City is here to help with damage caused by high winds.  Roofs can be impacted and when winds are strong enough, they can down trees.  Most importantly, they cause wildfires.  Please be safe as Santa Ana winds and Red Flag warnings run through sometimes May.

Follow our Social Media accounts for tips to avoid disasters: