Should You Be Concerned About Cracks in Your Foundation? 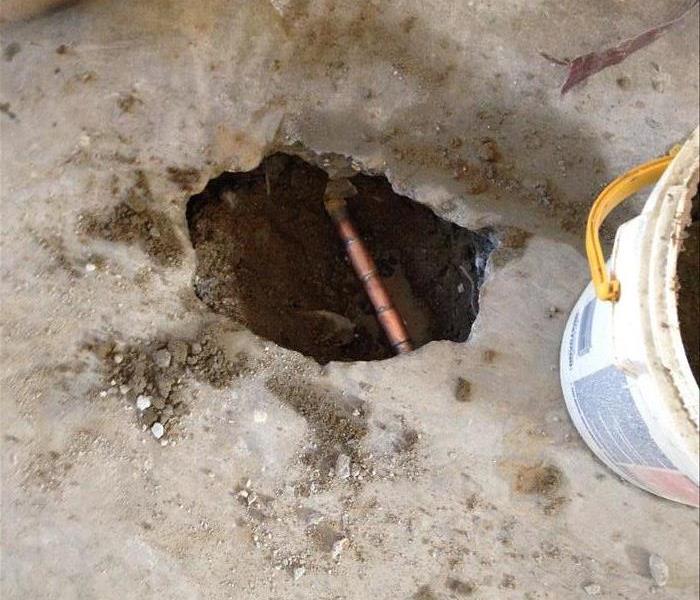 This photo shows one kind of slab leak, a slow leak from a pin hole.

The foundation underneath your home serves a very important purpose. It’s what keeps your house aboveground, deters moisture, and insulates your home against the cold weather. When that foundation starts to form cracks, it should make any homeowner concerned. This is because properly developed foundations are created to withhold natural settling that occurs when a house ages. This means that if you see cracks in your home’s foundation, something is not right. Because of its seriousness, SERVPRO of West Riverside City wants to help educate others on how serious cracks in a home’s foundation can be.

What’s the big deal with having cracks in a home’s foundation?

It doesn’t matter where the cracks are located or how big or small they become, finding a crack in the foundation is never a good sign, as it means that the foundation itself is moving. Because the foundation acts as the platform for a house to be built on, having the foundation move around only leads to structural problems and damages to your home. When cracks start to form, it can lead to many unwanted scenarios or events. Here are just a few:

If there are cracks in your foundation, that means that the cracks can act as an entranceway for water to enter your home and ruin the basement and other parts of your house. Along with that, the water can help make the cracks larger and spread at a faster rate, which only means more damage to your home.

When a foundation starts to degrade, the water entering can cause the foundation to erode at a faster pace, which can also cause serious damage to a home.

Nobody wants to deal with termites. Unfortunately, cracks in a house’s foundation can help invite them into your home. The cracks make it very easy for them to gain access to your home. Once the termites are there, the repercussions are costly and no fun.

How do cracks form?

All three items mentioned above are clearly things that no homeowner ever wants to deal with. Oftentimes the damage is not as bad if the cracks in the foundation are found earlier on. So what should a homeowner do? It helps to know the background as to how these cracks are formed in the first place. Here are a few ways cracks can form on your house’s foundation:

The actual creation of a house’s foundation is very important as to whether or not cracks will form. If the foundation mixture has too much sand or water, it will not set properly, which overtime, can cause the foundation to erode.

An intense amount of sunlight exposure can cause concrete to expand during the day. When the sun goes down, the concrete can go back to its normal position. Having this constant expansion and shrinkage occur can cause your foundation to crack.

4. Leaks in the plumbing.

Having to deal with water leaks in your house is a pain and often very time consuming. But when a leak happens, don’t forget to check your home’s foundation. If there is an excess amount of water leaking into your basement, this can cause pressure against the foundation, making it more vulnerable to cracks.

Southern California’s recent weather has caused quite a bit of chaos. First, there was the statewide drought. Then El Nino brought possible flooding issues to some homeowners. Both cases are no good for a house’s foundation. Droughts and floods can change the typical soil pressure around the foundation, which can then cause it to move and eventually crack.

How Water Can Damage a Home’s Foundation

Water can have a huge impact on a home. Whether it’s a pipe leak or a flood, the damage it can bring to the home is overwhelming.  But on top of that, water can create major problems with a home’s foundation. Here is how water plays a major role in a home’s foundation damage.

We can’t always escape water. At some point, rain or snow will hit your home. But there are certain soils that drain better than others. Those made out of loam or sand typically have good drainage, which means these soils don’t provide an issue with foundation damage. However, soils made out of clay are expansive and tend to absorb water around them. When the soil expands, it surrounds the foundation of a home and creates a pressure against the foundation. As this pressure starts to build against the foundation wall, cracks start to form.

2. The absence of water hurts, too.

So, what can I do to prevent it?

After reading about all of the terrible effects and damages a cracked foundation can have on a home, you may be wondering to yourself, “what can I do to prevent all of this from happening to my home?” Fortunately, SERVPRO of West Riverside City has compiled a list of tips to help you prevent water damage and a cracked foundation to your property.

Cleaning your gutters on a regular basis can help ensure good drainage. This in turn can help prevent cracks to your foundation.

In order to avoid cracks forming within your foundation, be sure to test your sump pump at least once a year. If it’s storm season in your area, be sure to check it more frequently.

Any visible leaks should be repaired as soon as possible, in order to prevent any future water damage. Be sure to check for dark spots on ceilings or pipes, as it can also be an indicator of water damage. Evidence of water damage has the ability to create cracks in the foundation. If your home shows any signs of water damage, be sure to contact SERVPRO of West Riverside City, as we are leaders in the water damage removal process.

How Cracks in a Home’s Foundation Can Create Slab Leaks

Oftentimes, a crack in a house’s foundation can lead to a slab leak in your home, which is another thing no homeowner wants to deal with. Fortunately, SERVPRO of West Riverside City has lots of experience in dealing with slab leaks.

When we received their call, we immediately sent out our Project Manager to inspect the damage. After looking around the area, he realized that the homeowner had a slab leak that ended up affecting the bedroom, bathroom and laundry room. He reached out to Crew Chief and his team of technicians started to get the project underway immediately.

The SERVPRO of West Riverside City team had to remove the wet baseboards in all the rooms and the padding in the bedroom, but they were able to save the carpet by floating it. They then set up dehumidifiers and fans to help the rooms dry out.

The homeowner was very happy and appreciated all of SERVPRO of West Riverside City’s help. They were thrilled that we were able to save their carpet and grateful for our quick service. They let us know that if they’d call us for their future water damage needs.

If your home has been affected by a cracked foundation or has any other signs of water damage, give SERVPRO of West Riverside City a call! We are happy to help with any water damage problems.